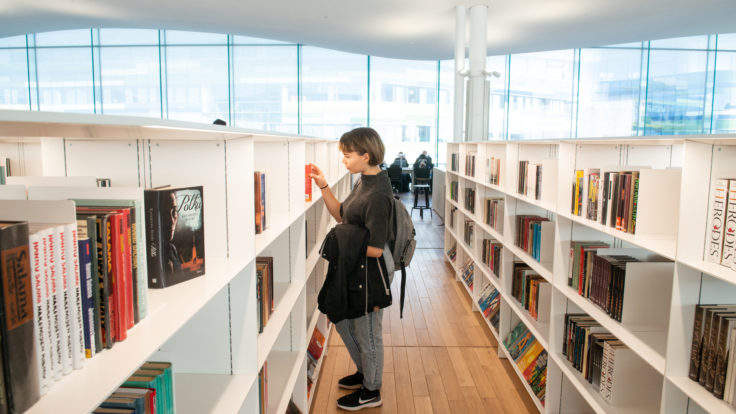 Finland has a love affair with literature, from The Kalevala folk epic to Mika Waltari’s historical fiction; from Väinö Linna’s war novels to Maria Turtschaninoff’s fantasies. Modern Finnish authors do not shrink from tackling the global themes of today or bringing new perspectives to the scrutiny of national historical events.

LITERATURE FOR THE WORLD

Our small language area – covering both Finnish and Swedish – provides literature for the world and is building a wider following. Experienced and professional translators promote the international profile of Finnish literature. Every year, 300–400 Finnish literature translations are published abroad in about 40 different languages.

Finnish books for children and young adults are in demand worldwide, in languages ranging from German to Arabic and even Chinese. In 2019 more than half (53 percent) of export revenue came from children’s and young adult’s literature. Our classics are also getting new translations to appeal to readers near and far. Even the English-language markets, often considered challenging, are beginning to open up to Finnish literature. This is expected to be a turning point for the international visibility of Finnish literature.

The Finnish written language is quite new compared to some European languages. The beginning of the Finnish literature journey goes back to the 1540s when Finnish Lutheran reformer Mikael Agricola (1510–1557) published Abckiria (ABC Book), which is the first book ever written in Finnish. Agricola also translated the New Testament into Finnish, which made reading biblical texts possible for regular, non-Latin speaking people. After that, Finnish literature was mostly religious until 1800.

The increasing interest in Karelian heritage and landscape, also known as Karelianism, had a big influence on Finnish literature in the latter part of the 19th century. The Finnish national epic Kalevala by Elias Lönnrot was compiled from Karelian folklore and published in 1835. The first novel in Finnish, Seven Brothers (Seitsemän veljestä) by Aleksis Kivi (1834–1872), was published in 1870. Seven Brothers has been translated into 34 different languages and is still considered one of the most important works of Finnish literature.

Other notable works which were written in the late 1800s and early 1900s are, for example, Meek Heritage (Hurskas kurjuus) (1919) by Nobel Prize winning Frans Eemil Sillanpää (1888–1964), The Worker’s Wife (Työmiehen vaimo) by Minna Canth (1844–1897) and The Unknown Soldier (Tuntematon sotilas) (1954) by Väinö Linna (1920-1992). Minna Canth is also known for her work for equality and woman’s rights and is the first woman in Finnish history to receive her own flag day, 19 March, which is also known as the day of social equality. These Finnish literature works still influence and inspire Finnish and international authors.

In the 2020s the Finnish comic book industry is vibrant, multi-voiced and not afraid to cross genre boundaries. Despite being a small country, Finland is home to a surprisingly large number of cartoonists. In fact, the small size of the country and its limited comic book market may help to explain why Finnish comic strips tend to be so artistically ambitious and go beyond specific trends. Finland is well known abroad for Tom of Finland and major works such as those by Tove Jansson, but when it comes to comic books, big publishing houses do not serve as gatekeepers. Furthermore, in the field of the comic book business, privately published books and small producers form a significant part of the whole.

In the 21st century the Finnish comic book business has gone global. A considerable number of Finnish comic books have been published in Central Europe, and many artists are now working with international audiences in mind.

KUTIKUTI, a non-profit contemporary comics association that publishes the free Kuti magazine, has been attracting attention abroad and helping cartoonists break into the global market since 2006.  The many comic book events held in Finland have also found their own audiences: the Helsinki Comics Festival is the biggest annual Nordic event in its category and an important venue for encounters on an international scale.

Children’s and young people’s literature is also actively written in Finland. Topics range from fantasy to Finnish mythology and animal stories. In addition to Tove Jansson, known as the creator of the beloved Moomin books, there are many other writers for children and young people in Finland, such as Mauri Kunnas and Salla Simukka.

The most translated works for children and young readers (11/2019)

Finland is a bilingual country and the official languages are Finnish and Swedish, so Finnish literature is also bilingual. About 5 percent of the Finnish population speaks Swedish as their mother tongue and Swedish-language literature is actively published. Well-known Finnish-Swedish writers include Tove Jansson, Zachris Topelius and Kjell Westö.

There is also some Sámi literature in Finland, although there are only a few Sámi-language translators and publishers in Finland.

Finland is also known for its comprehensive library network, high rates of users and lending, and effective use of technology and information networks. In Finland there are over 300 central libraries, 500 branch libraries, and on top of that mobile libraries, which operate in sparsely populated areas. Library services in Finland are efficient, accessible and cost effective. The library is a basic municipal service and the use and borrowing of library materials are free of charge. Around 80 percent of Finns are regular library users. Finns visit libraries 10 times a year on average, borrowing 18 books, discs or magazines. Library websites register over 57 million visits a year.

In Finland libraries do not only offer books to loan but much more. Libraries are really popular with the public and are being actively developed to better meet people’s needs. Finnish libraries are advanced in terms of selection and digitalisation. Libraries have a long history in society as an open, free-of-charge, low-threshold place to learn, work, study and organise events.

The most well-known Finnish library, Oodi, is a pioneer of libraries. In Oodi, in addition to loaning books, magazines, games and audio material, customers can use a variety of professional tools from a laser cutter to a 3D printer. In addition to these, various studios and playrooms can be booked, where guests can produce their own music and borrow musical instruments.

Audiobooks are also very popular among Finnish people. The selection includes all kinds of books from children’s literature to novels and non-fiction. There are multiple apps for listening to audiobooks and new audiobooks in Finnish are released continuously.

Literature exports, or income from the sale of rights to Finnish literature, are increasing rapidly:

Most published languages in translation of Finnish literature (1900-2019)

CELEBRITIES IN THE INDUSTRY

Sofi Oksanen (1977–) is the most awarded contemporary Finnish author. Her works have been published in over 50 languages. Her most well-known novel, Purge (Puhdistus), has sold more than a million copies worldwide. Purge is one of the best-known and most praised Finnish contemporary books. Sofi Oksanen has a unique way of telling stories which have a strong link to history.

Tove Jansson’s (1914–2001) books for children and adults have always found new readers from one decade to the next, abroad as well as in Finland. Jansson is best known for her Moomin books for children, which have also been made into multiple films and TV series. Besides books, Jansson also expressed her artistry as a painter, graphic artist, caricaturist and comic strip artist. Jansson’s Moomin stories have been translated into about 50 different languages.

Mika Waltari (1908–1979) was a Finnish multi-skilled writer. He was best known for his best-selling novel The Egyptian (Sinuhe egyptiläinen), which is often regarded as one of the best works of Finnish literature. The Eqyptian is a historical novel and has been published in at least 36 countries. Waltari used his time well and wrote 22 novels, 15 novellas, 26 plays, 6 poetry collections, about 100 book reviews, magazine articles and much more during his lifetime.

Salla Simukka (1981–) is a Finnish writer, translator and literary critic. The rights to Salla Simukka’s trilogy for young adults have been sold to 52 language areas. Simukka’s most well-known book, As Red as Blood (Punainen kuin meri) (2013), is the most translated book for children and young readers. It has been translated into 37 different languages, as of November 2019.

Leena Lehtolainen (1964–) is well-known for her Nordic crime novels featuring the female detective Maria Kallio. The most recent installment, My First Murder (Ensimmäinen murhani), sold over 2 million copies in 29 countries. Other well-known and widely translated Finnish authors are for example Antti Tuomainen and Max Seeck.

Finnish Literature Exchange, FILI, promotes the export of literature by acting as an intermediary for professional contacts. FILI brings together translators of Finnish literature and arranges training for them. Among other things, Fili distributes translation grants, travel grants and promotional grants of approximately 700,000 euros annually to more than 400 different projects and maintains a database of translations of Finnish literature.

FILI – Finnish Literature Exchange
this is FINLAND: Finnish Contemporary Literature: A Wealth of Voices
The Union of Finnish Writers
Public libraries in Finland
The Society of Swedish Literature in Finland (SLS) 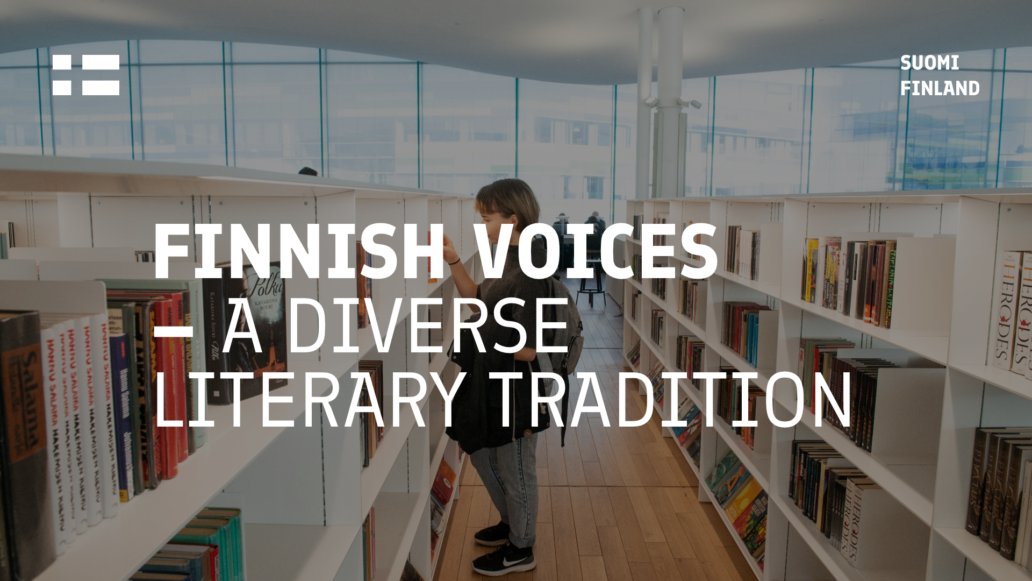 Finland has a love affair with literature, from The Kalevala folk epic to Mika Waltari’s historical fiction; from Väinö Linna’s war novels to Maria Turtschaninoff’s fantasies. Modern Finnish authors do not shrink from tackling the global themes of today or bringing new perspectives to the scrutiny of national historical events.

This presentation offers some basic information on Finnish literature industry. 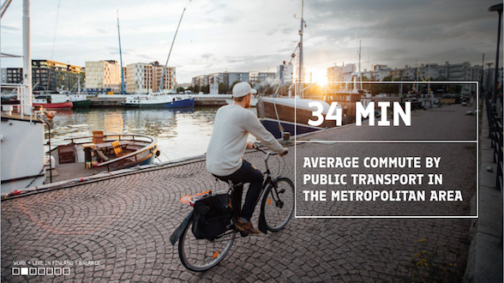 Build a life around your career in Finland! Balancing work with life is made easy. We invest in knowledge, innovation… 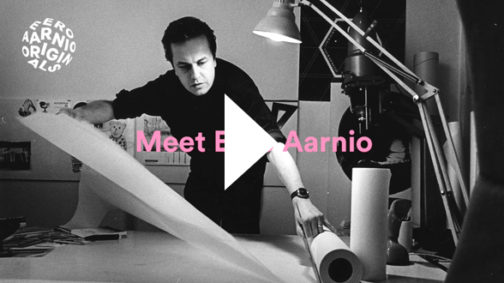 Meet Eero Aarnio, Finnish designer, who is known for his unique and playful design aesthetic. The Ball Chair (1963) is considered…

All Finns can go to sauna at the same time 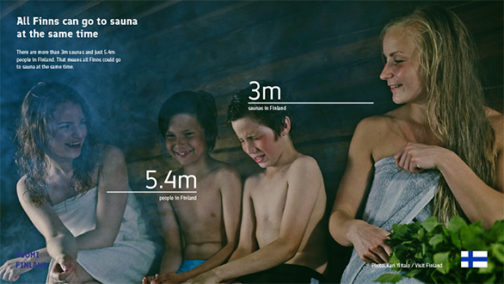 There are more than 3m saunas and just 5.4m people in Finland. That means all Finns could go to sauna…

The Game Industry of Finland Report 2020 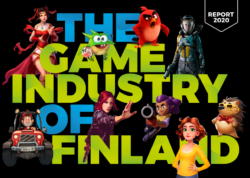 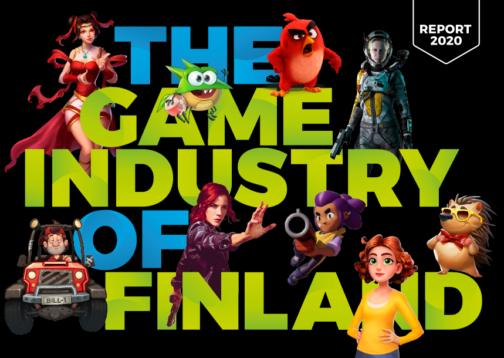